Mirae Lee is a conductor, composer, and pianist with a variety of worldwide experiences. She is currently a DMA student in Choral Conducting at the University of Arizona under Dr. Schauer and expects to complete her degree in May 2022. Mirae was awarded the Medici scholarship, many other scholarships, and fellowship at University of Arizona. Currently, as one of her teaching assistantship’s duties, she has been working with University Community Choir and worked with Tucson Arizona Boys Choir as an assistant conductor. In addition, she has served as a music director in Tucson Apple Tree church and as a communication’s chair in graduate chapter of American Choral Directors Association at the University of Arizona.

During her academic years in Tucson, Mirae published her article, Understanding Arirang, Korea’s Representative Folk Song in Antiphon, which is a publication of the Arizona American Choral Directors Association. Also, Mirae invited as a guest lecturer for choral literature class at University of Missouri-Kansas City and webinar at University Community Chorus and she served as a panel for a session of Virtual Diversity, Equity, and Inclusion Series provided by ACDA Western.

Before she moved to Tucson, she completed her master’s degree in the University of Alabama, Tuscaloosa, AL. She got a full scholarship during two years served as a Teaching assistantship and an assistant conductor for the University Singers, University Chorus, women’s choir, chamber choir, and Men’s choir under Dr. Andrew Minear from 2017 to 2019. Not only assistant choirs, but also she assistance the Fundamentals of Conducting, which a class designed for undergraduate student. Since Mirae served as an accompanist from her age 10-year old and she had various experiences as a pianist, she played for conducting lesson for graduate-level, honor choir, Alabama-All State choir, conducting masterclass. Besides, she was selected for a Student Conductor’s Masterclass in Southern Region American Choral Directors Association at Louisville, Kentucky. Dr. Ken Fulton and Dr. Judy Bowers served as the clinicians and Mirae conducted University of the Cumberland’s Chorale. Plus, she was selected a presenter in the reading session.

Before she moved to United States, she attend Chung-Ang University where she received her Bachelor of Music in Composition. During her college time, she passionate to composer choral works and her works was premiered by both of professional choir and collegiate choir. One of her works, PoongNyeon Nohree, was won a grand prize with prize money in Choral Music Composition Competition hosted by An-Dong City, South Korea and it was published.

As a conductor, she served a music director for non-music major choir consisting of only college students and church choirs. And she experienced various age, and kinds of choirs as an assistant conductor. She also was interested in conducting new choral songs composed by young composers and choral pieces were premiered under her direction.

Since Mirae has a special passion and dedication especially for children’s art education. She went to the Nairobi, Kenya for volunteering and teaching music to Kenyan Children in 2013. During that time, she taught choir, piano, and basic theory to all different level of Kenyan children group. Inspired by this experience, she co-found an organization the Watoto Wangu Foundation in 2014 with Korean and Kenyan friends and its mission is to build small bus libraries where it provided not only a place for reading books but also for music and art education. Through different types of fundraising, we built the bus library in Nairobi, Kenya in 2014 and it is still running. 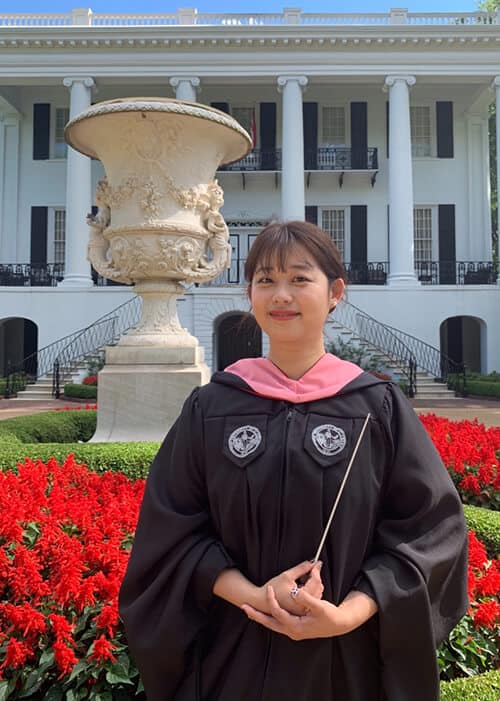